Native to the tropical regions of South America. Giant water lilies (Victoria amazonica) known for huge leaves which can grow up to 3 meters in diameter and can support heavy objects. Belongs to the plant family Nymphaeaceae (family of water lilies) and accounted as the largest member of the family. This was taken at the Shuangxi Park (雙溪公園) of Taipei City, Taiwan. They hold an annual Floating Giant Water Lily Exhibition during the Lilly season. In promoting the annual event Taipei mayor was seen sitting on one of this giant lily. Visitors too can take a chance to sit on one of these and take a photo but need to register themselves priorly.

Taipei Botanical Garden is a nice little hideout from the buzzling urban city of Taipei. Although its relatively small in size they have arrange and managed it well. Its famous for the big louts pond. However, this is from just opposite to that pond...
Posted by Suranjith at 3:11 PM No comments:

* this is not the direct view of the falls but a side view.
Posted by Suranjith at 11:54 PM No comments:

A thought in celebrating the World Environment Day... 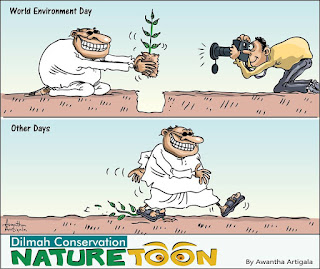 We all have these fellows... dont we?  Are we going to vote them in the next election...?  Better think of that next time...

Hope for the best in the coming years and lets do something good for our mother nature...

Posted by Suranjith at 9:04 PM No comments:

When I overheard the new about the super moon recently, I wanted to make snap of it. Unfortunately for me, Sky on the day (July 12) was full of clouds here in Taipei. However, I managed to capture a decent view of it on the day after.

According to NASA, "perigee moon" is the scientific term for a super moon. It means the moon is at the point in its orbit that brings it closer to Earth. The result is that the world’s closest neighbor appears larger and brighter than usual – with breath-taking results.

I still have two more chances for this year, two other supermoons will appear later this summer on 10 August and 9 September. Let’s see how that goes.
Posted by Suranjith at 11:35 AM No comments:

I just wanted to see the distance from Colombo to Taipei, the two capital cities of Sri Lanka and Taiwan respectively. I'm originally from Sri Lanka now in Taiwan, though I've been here for almost three years now didn't actually wanted to see how far actually I am away from my home. I had a rough figure around 3000kms and that seems to be a bad estimation, as it turned out to be actually around  ~4800 km. The circumference of Earth at the equator is about 40,075 km. Well with compared to that, this is just 1/10 of it...

Posted by Suranjith at 1:01 PM No comments:

It was a beautiful view of the sunsets from my office room at the 11th floor at Academia Sinica over the Nangang Mountains. Reminds me of the panoramic sunsets that I used to have from my office at the Chinese Culture University in Yangmingshan.

Posted by Suranjith at 12:58 AM No comments: